To list holidays that occur between two dates, you can use a formula based on the TEXTJOIN and IF functions. 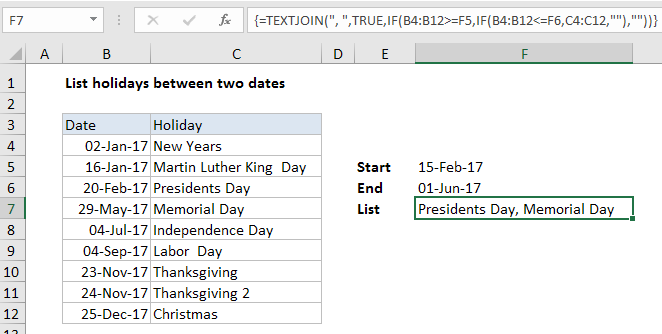 Note: the TEXTJOIN function is new in Excel 2016.

In the example shown, the formula in F8 is:

This is an array formula and must be entered with control + shift + enter.

Worked Example:   Not Equal To '<>' operator in Excel

At a high level, this formula uses a nested IF function to return an array of holidays between two dates. This array is then processed by the TEXTJOIN function, which converts the array to text using a comma as the delimiter.

Working from the inside out, we generate the array of matching holidays using a nested IF:

Worked Example:   Excel If, Nested If, And/Or Criteria Examples

This array is then delivered to the TEXTJOIN function as the text1 argument, where the delimiter is set to “, ” and ignore_empty is TRUE. The TEXT JOIN function processes the items in the array and returns a string where every non-empty item is separated by a comma plus space.