This tutorial shows how to Convert decimal minutes to Excel time using example below.

To convert minutes in decimal format to a proper Excel time, divide by 1440. 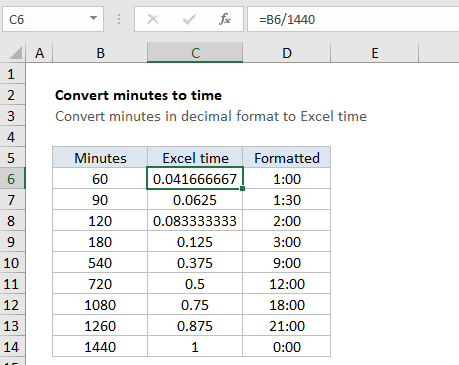 In the example shown, the formula in C6 is:

In the Excel date system, one day is equal to 1, so you can think of time as fractional values of 1, as shown in the table below:

This means if you have a decimal number for minutes, you can divide by 1440 (24 x 60) to get the correct representation of minutes in Excel. After dividing by 1440, you can apply a time format of your choice, or use the result in a math operation with other dates or times.

To display hours that represent a duration longer than 24 hours, or minutes in durations longer than 60 minutes, you’ll need to adjust the number format by adding square brackets.

The brackets signal to Excel that the time is a duration, and not a time of day.