This tutorial shows how to Conditionally format based on another cell in Excel using the example below; 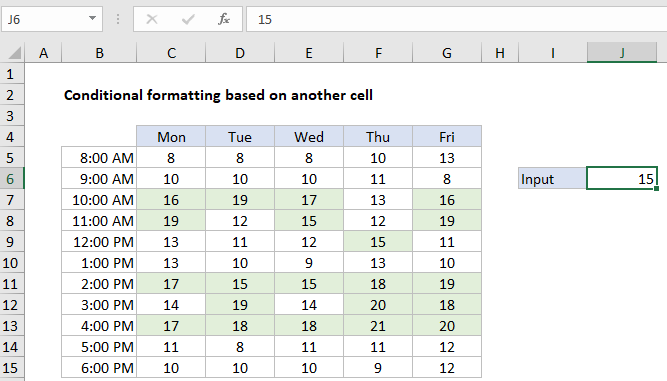 Excel contains many built-in “presets” for highlighting values with conditional formatting, including a preset to highlight cells greater than a specific value. However, by using your own formula, you have more flexibility and control.

In this example, a conditional formatting rule is set up to highlight cells in the range C5:G15 when then are greater than the value entered in cell J6. The formula used to create the rule is:

The rule is applied to the entire range C5:G15, and the value in J6 can be changed at any time by the user. When a new value is entered, the highlighting is immediately updated.

When a value in the range is greater than or equal to 15 (the current value in J6), the formula returns TRUE and the rule is triggered.