This tutorials shows Basic timesheet formula with breaks in Excel.

To calculate work hours, taking into account break time that needs to be subtracted, you can use a formula based on the MOD function. MOD is used to handle start and end times that cross midnight.

In the example shown, the formula in F6 is:

At the core, this formula subtracts start time from end time to get duration in hours. This is done to calculate both work time and break time.

Worked Example:   How to calculate most recent day of week in Excel

Next, break time is subtracted from work time to get “net work hours”.

Worked Example:   Even and Odd function in Excel

This formula uses the the MOD function to handle times that cross a day boundary (midnight). By using MOD with a divisor of 1, positive results are unchanged, but negative results (which occur when start time is greater than end time) are “flipped” to get a correct duration.

For more details, see: How to calculate number of hours between two times

Worked Example:   Extract time from a date and time in Excel

The screenshot below shows an alternative format to capture time worked. Instead of logging work and break time separately, this version captures two separate in/out times for a single shift. 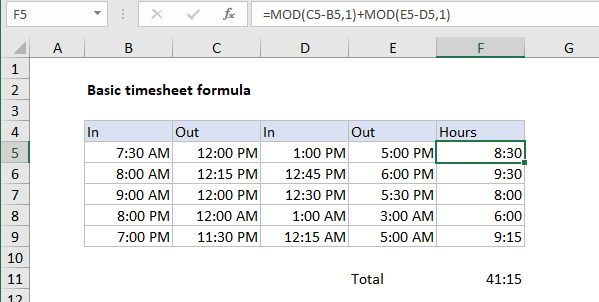 For this layout, the formula used in F5 is:

Instead of subtracting break time from work time, we add together two work times.