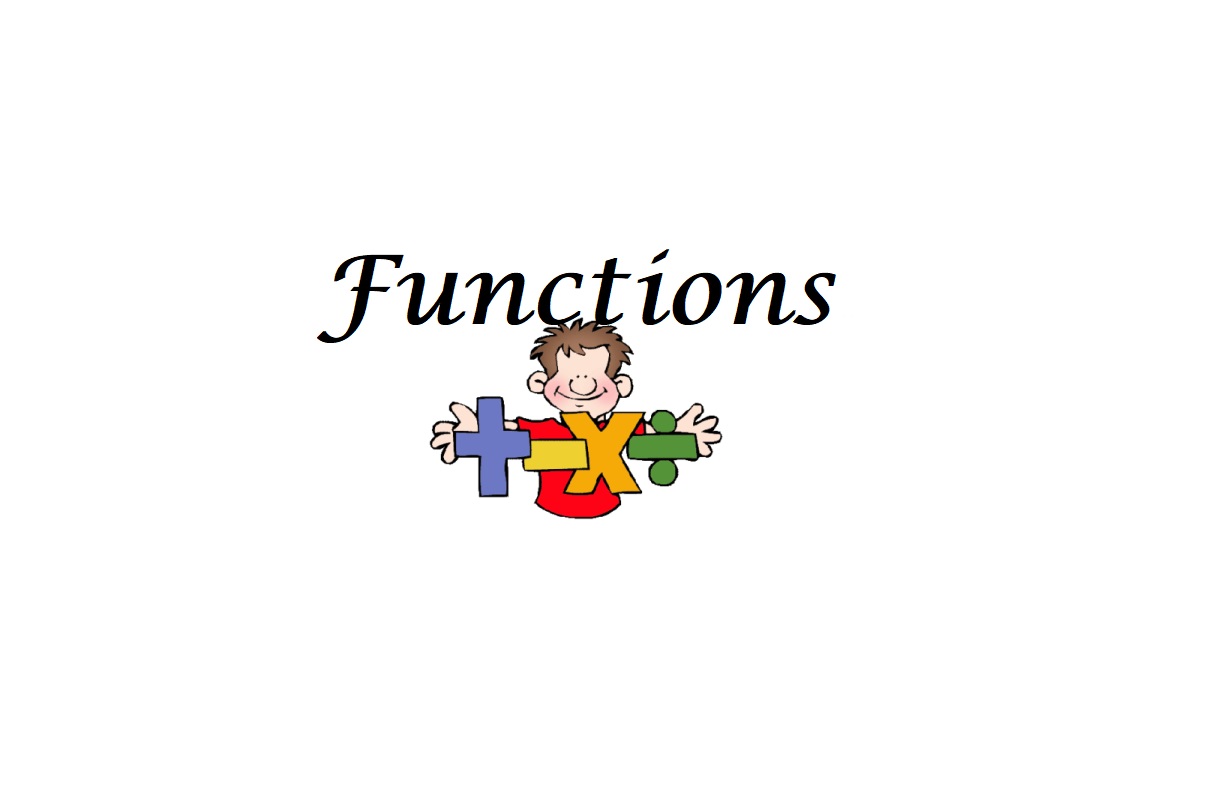 Mastering the basic Excel formulas is critical for beginners to become highly proficient in data analysis.

A formula is an expression which calculates the value of a cell. Functions are predefined formulas and are already available in Excel. Every formula in Excel starts with an equal sign, then the function name and in bracket a cell name or cell ranges or cell references. See illustration below:

For example, cell A3 below contains the SUM function which calculates the sum of the range A1:A2.

To enter a formula, execute the following steps.

2. To let Excel know that you want to enter a formula, type an equal sign (=).

Tip: instead of typing A1 and A2, simply select cell A1 and cell A2.

Excel automatically recalculates the value of cell A3. This is one of Excel’s most powerful features!

When you select a cell, Excel shows the value or formula of the cell in the formula bar.

1. To edit a formula, click in the formula bar and change the formula.

Excel uses a default order in which calculations occur. If a part of the formula is in parentheses, that part will be calculated first. It then performs multiplication or division calculations. Once this is complete, Excel will add and subtract the remainder of your formula. See the example below.

First, Excel performs multiplication (A1 * A2). Next, Excel adds the value of cell A3 to this result.

First, Excel calculates the part in parentheses (A2+A3). Next, it multiplies this result by the value of cell A1.

When you copy a formula, Excel automatically adjusts the cell references for each new cell the formula is copied to. To understand this, execute the following steps.

1. Enter the formula shown below into cell A4.

…next, select cell B4, right click, and then click Paste under ‘Paste Options:’ (or press CTRL + v).

2b. You can also drag the formula to cell B4. Select cell A4, click on the lower right corner of cell A4 and drag it across to cell B4. This is much easier and gives the exact same result!

Result. The formula in cell B4 references the values in column B.

Every function has the same structure. For example, SUM(A1:A4). The name of this function is SUM. The part between the brackets (arguments) means we give Excel the range A1:A4 as input. This function adds the values in cells A1, A2, A3 and A4. It’s not easy to remember which function and which arguments to use for each task. Fortunately, the Insert Function feature in Excel helps you with this.

Worked Example:   COUNTIFS with multiple criteria and OR logic in Excel

To insert a function, execute the following steps.

3. Search for a function or select a function from a category. For example, choose COUNTIF from the Statistical category. 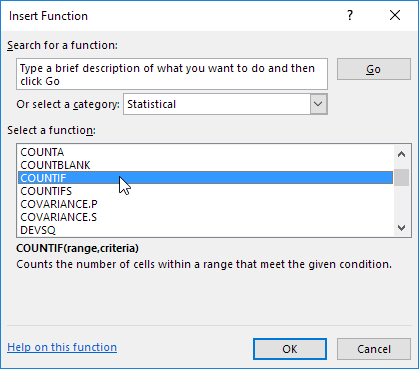 Result. The COUNTIF function counts the number of cells that are greater than 5.

Note: instead of using the Insert Function feature, simply type =COUNTIF(A1:C2,”>5″). When you arrive at: =COUNTIF( instead of typing A1:C2, simply select the range A1:C2.

The SUM() function, as the name suggests, gives the total of the selected range of cell values. It performs the mathematical operation which is addition. Here’s an example of it below: 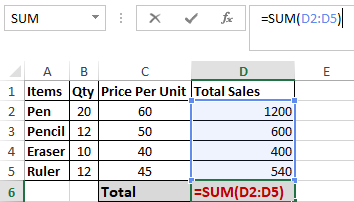 The AVERAGE() function focuses on calculating the average of the selected range of cell values. As seen from the below example, to find the avg of the total sales, you have to simply type in “AVERAGE(D2, D3, D4,D5)”. 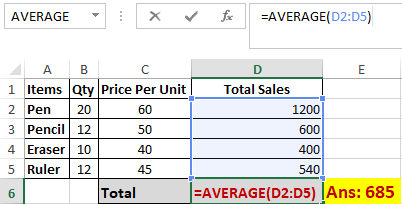 It automatically calculates the average, and you can store the result in your desired location.

The function COUNT() counts the total number of cells in a range that contains a number. It does not include the cell, which is blank, and the ones that hold data in any other format apart from numeric.

As seen above, here, we are counting from C1 to C4, ideally four cells. But since the COUNT function takes only the cells with numerical values into consideration, the answer is 3 as the cell containing “Total Sales” is omitted here.

Moving ahead, let’s now understand how the subtotal function works. The SUBTOTAL() function returns the subtotal in a database. Depending on what you want, you can select either average, count, sum, min, max, min, and others. Let’s have a look at two such examples.

In the example above, we have performed the subtotal calculation on cells ranging from A2 to A4. As you can see, the function used is “=SUBTOTAL(1, B2: B5), in the subtotal list “1” refers to average. Hence, the above function will give the average of B2: B5 and the answer to it is 13.5, which is stored in D6.

Similarly, “=SUBTOTAL(4, B2: B5)” selects the cell with the maximum value from B2 to B5, which is 20. Incorporating “4” in the function provides the maximum result.

The MOD() function works on returning the remainder when a particular number is divided by a divisor. Let’s now have a look at the examples below for better understanding.

In the first example, we have divided 20 by 3. The remainder is calculated using the function “=MOD(B2,3)”. The result is stored in B2. We can also directly type “=MOD(20,3)” as it will give the same answer.
modulus

The function “Power()” returns the result of a number raised to a certain power. Let’s have a look at the examples shown below:

Next, we have the ceiling function. The CEILING() function rounds a number up to its nearest multiple of significance.

Contrary to the Ceiling function, the floor function rounds a number down to the nearest multiple of significance.

This function merges or joins several text strings into one text string. Given below are the different ways to perform this function.

In this example, we have operated with the syntax =CONCATENATE(A25, ” “, B25)
concatenate

In this example, we have operated with the syntax using alternate method =A2&” “&B2
concatenate-function.

The function LEN() returns the total number of characters in a string. So, it will count the overall characters, including spaces and special characters. Given below is an example of the Len function.

As the name suggests, the REPLACE() function works on replacing the part of a text string with a different text string.

The syntax is “=REPLACE(old_text, start_num, num_chars, new_text)”. Here, start_num refers to the index position you want to start replacing the characters with. Next, num_chars indicate the number of characters you want to replace.

Let’s have a look at the ways we can use this function.

Let’s understand this better with the following examples:

Here, we have converted the text range A2-A5 to Capital Letters in B2-B5.

Now, we have converted the text range A2-A5 to Small Letters in B2-B5.

Finally, we have converted the improper text in range A2-A5 to Initial Caps in B2-B5.

Now, let us hop on to exploring some date and time functions in Excel.

Let’s understand these functions with a few examples.

In the example below, we use the function left to extract 6 leftmost numbers from the “text string”/numbers in the table.

Shown below is an example using the mid function.

Here, we have an example of the right function. The example below, illustrates the use of Right function to extract the last 4 numbers from the right of the “text string”/numbers in the table.

The NOW() function in Excel gives the current system date and time.

The result of the NOW() function will change based on your system date and time.

The TODAY() function in Excel provides the current system date.

The MONTH() function returns the month, a number from 1 to 12, where 1 is January and 12 is December.

The YEAR() function, as the name suggests, returns the year from a date value.

The TIME() function converts hours, minutes, seconds given as numbers to an Excel serial number, formatted with a time format.

The function MINUTE(), returns the minute from a time value as a number from 0 to 59.

The SECOND() function returns the second from a time value as a number from 0 to 59.

The DATEDIF() function provides the difference between two dates in terms of years, months, or days.

Below is an example of a DATEDIF function where we calculate the current age of a person based on two given dates, the date of birth and today’s date.