To get a full set of relative row numbers in a range, you can use an array formula based on the ROW function. See example below; 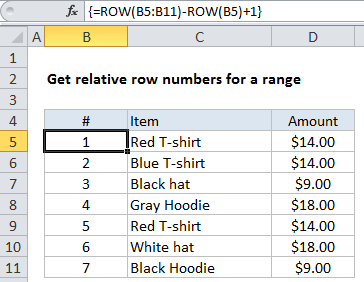 Worked Example:   How to return TRUE when all cells in range are blank in Excel

In the example shown, the formula in B5:B11 is:

This is formula will continue to generate relative numbers even when the range is moved. However, it’s not a good choice if rows need to be sorted, deleted, or added, because the array formula will prevent changes.

The first ROW function generates an array of 7 numbers like this:

The second ROW function generates an array with just one item like this:

which is then subtracted from the first array to yield:

Finally, 1 is added to get:

With a named range, you can create a more generic version of the formula using the MIN function or the INDEX function. For example, with the named range “list”, you can use MIN like this:

With INDEX, we fetch the first reference in the named range, and using ROW on that:

You’ll often see “relative row” formulas like this inside complex array formulas that need row numbers to calculate a result.