This tutorial shows how to Highlight missing values in Excel using the example below; 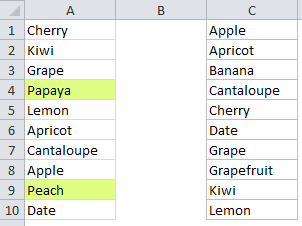 Note: with conditional formatting, it’s important to enter the formula relative to the “active cell” in the selection, which is assumed to be A1 in this case.

Worked Example:   Running count of occurrence in list in Excel

This formula is evaluated for each of the 10 cells in A1:D10. A1 will change to the address of the cell being evaluated, while C1:C10 is entered as an absolute address, so it won’t change at all.

Worked Example:   If cell begins with x, y, or z in Excel

But when a value is not found in C1:C10, the COUNTIF returns zero and, since 0 = 0, the formula will return TRUE and the conditional formatting will be applied.

If you name the list you are searching (C1:C10 in this case) with a named range, the formula is simpler to read and understand:

This works because named ranges are automatically absolute.

If you need a case sensitive count, you can use a formula like this:

The EXACT function performs a case-sensitive evaluation and SUMPRODUCT tallies the result. As with the COUNTIF, this formula will return when the result is zero. Because the test is case-sensitive, “apple” will show as missing even if “Apple” or “APPLE” appears in the second list. See this page for a more detailed explanation.