This tutorials shows how to Round a number up in Excel. 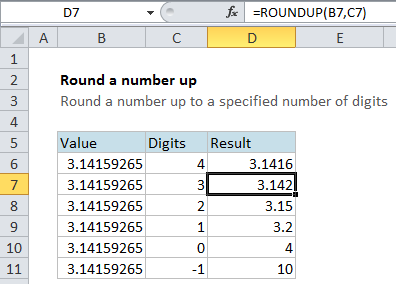 In the example, the formula in cell D7 is

Notice that even though the number in the 4th position to the right of the decimal is 1, it is still rounded up to 2.

Worked Example:   How to calculate quarter from date in Excel

In the table, the ROUNDUP function is used to round the same number (PI) to a decreasing number of digits, starting at 4 and moving down past zero to -1.

Worked Example:   How to randomly assign people to groups in Excel

Note that positive numbers round to the right of the decimal point, while digits specified less than or equal to zero round to the left.

You can see that ROUNDUP is a rather heavy-handed function, so use with care.