This tutorial shows how to work Tax rate calculation with fixed base in Excel using the example below; 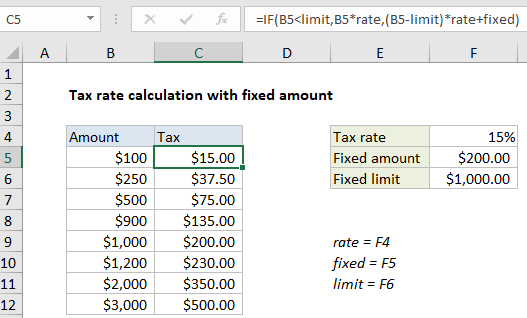 This example shows how to set up simple formula using the IF function to calculate a tax amount with both fixed and variable components. In the example shown, the formula in C5 is:

The rules of this problem are as follows:

The core of this formula is a single IF statement that checks the amount in column B against the base limit:

If TRUE, the formula simply multiplies the amount in B5 by tax rate:

If FALSE, the formula applies the tax rate to the amount over 1000, then adds the fixed amount: