This tutorial shows how to calculate If else in Excel using the example below;

In the example shown, we have a list of T-shirts that includes color and size. However, the size is abbreviated as “S” for small and “L” for large. Lets say you want to write a formula to expand these abbreviations and show either the word “Small” or “Large” in column E. In other words:

This is a perfect application of the IF function.

In the example, we need to test cells in column D to see what they contain, so the formula we are using in cell E5 is:

Worked Example:   How to calculate next scheduled event in Excel

Notice we are only testing for “S” — we don’t need to test for “L”. That’s because we only have two possible values, and the ELSE part of the formula (the FALSE result) logically takes care of “L” for us: if the cell doesn’t contain “S”, it must be “L”.

This works fine for two conditions, but what if we have a third condition?, for example, “M” for “Medium”?

Worked Example:   How to create Checklist in Excel

In that case, we need to extend the formula with another IF statement. We put the second IF statement, replacing the false result.

In the example below, we’ve added another size (Medium). The formula we are using in E5 is: 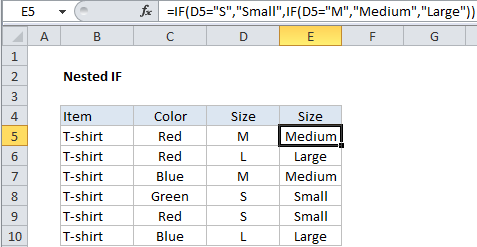 This technique is called “nesting”, since we are placing on function inside another. With it is used with the IF function, you’ll sometimes hear it called a “Nested IF statement”.